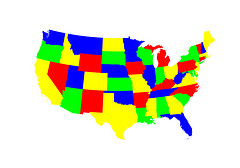 Since I have my resume posted publicly, and I have reactivated my Monster.com account, I am getting several emails and calls every day, most of which are for contracts in places I would never consider going, even for a temporary contract.

High on that list are states with an income tax. Nevermind that just because a state has an income tax doesn’t automatically mean that the overall tax burden is higher than my resident state of Texas (which has relatively high property taxes). Nevermind that my wife is a CPA and would not have any problem with doing the required paperwork. The problem is that most (not all) of the states with income taxes are usually not desirable places to live for any of a number of reasons. Not the least of which is that just the preparation of a state income tax complicates life. The worst of the places where I have actually been are: 1) Massachusetts, 2) Illinois,  3) California, and 4) New York,  in no particular order. I get so many emails about contracts in those states that I have crafted a form letter response instructing the recruiter to please contact me only if s/he has a contract lead somewhere else. The ones who ignore that get put on my ignore list. Those are the ones who are simply automating their search & placement, and not even trying to establish a relationship with me based on anything beyond the keywords in my resume.

Obviously, there are people who like those states for one reason or another. I’m not claiming that any of those reasons are invalid, just that they don’t apply to me.

There are some states where I wouldn’t mind going, but my wife would not want to go. Those include any state where it gets really cold, which rules out pretty much any state north of the Mason-Dixon Line, with the possible exception of some areas near a coast (like Portland, OR, or Seattle, WA). However, most of those places have other drawbacks, like really high prices for everything. Then there is the occasional hurricane. That’s not to say that the North Texas area is immune to severe weather (a few years ago, there was a tornado that touched down less than a mile from my house).

Moving is a huge expense, especially considering that I own a house, and I’ve been in it for over a decade (and collected more “stuff” than I really need, but don’t want to dump). That means that I would be more inclined to accept something within commuting distance even if there was less money offered. Actually, the last contract I did was for less money than I could have gotten elsewhere, but it was close by, and was very interesting work. In fact, I would have accepted an even lower rate, but my wife objected, and the company compromised with a higher rate, but limited to 32 hours per week. In retrospect, that actually worked out pretty well for me, because the scarcity of hours turned out to be a motivating factor for me. I ended up challenging myself with ways to do 40 hours worth of work in 32, so my overall productivity was higher. That contract was the most fun I’ve had since 2005, when I was doing software for antenna control systems using SwiftX (FORTH).

Another consideration with regard to any contract not in commuting distance is that I would have to, at least temporarily, shut down my violin teaching business. I am reluctant to do so because 1) I really enjoy teaching little kids how to play the violin, and 2) it takes time to re-establish that kind of business.

But unfortunately, life is more complicated than that. For instance, I might consider a direct-hire position in some place like San Antonio, Houston, or maybe even Austin if the pay was good and the job was a really good fit. That’s because my wife and I like to cruise, and all of those cities are several hours closer to a commercial cruise port than Plano is.

My first choice remains a local contract. And if something like that doesn’t materialize fairly soon, Plan B is expanding my existing side businesses.