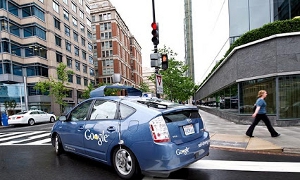 One of the main topics of conversation between my spouse and me on the way back from Raleigh, NC was driverless cars. Driving long distances is something that we consider to be boring and dangerous, which is one of the reasons that we worked out a system to reduce fatigue by driving 90-minute “shifts” and stopping between those shifts, for snacks, gas, bathroom breaks and other necessities. It works well for us.

We also avoid doing more than about 10 hours total of driving, or roughly 12 hours total travel time, in a day. We once did a marathon 24-hour drive (with 90-minute shifts), but after that, we decided that sort of thing was simply too dangerous and stressful. Whoever was not driving was trying to nap, which meant that only one pair of eyes was on the road.

We speculated that it would be 20 years before driverless cars would be mainstream. It looks like we may be wrong about that (I hope so!). Google seems to think it can have completely autonomous cars on public roads by 2017. So does Cadillac. Along with several other car manufacturers currently testing driverless cars.

I can hardly wait.