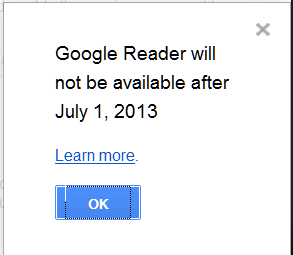 I got yet another unpleasant surprise from Google yesterday when I went to access my Google Reader. There was a dialog with a message that told me that Google reader was going away next July 1st. The only available responses were the blue OK button, the little X in the upper right corner to close, and a “Learn more” link.

Google, let me assure you that this is NOT “OK.”

Turns out that the blogosphere lit up almost immediately on this topic, with more than one blogger lamenting that he did not know of any good alternative to Google reader.

Google’s story on this was that Google Reader was suffering from declining use. I call bullshit on this one.

It looks to me like Google has been trying to kill off Reader for quite a while now. It initially had some useful social features, but those got removed more than a year ago. Google’s explanation for that was that those features were redundant. That was also BS.

IMNSHO, the real reason for Google wanting to kill Reader is that they flubbed on the monetization (at least twice), and it isn’t producing enough revenue to keep the billionaires in charge satisfied. Google Reader has LOTS of users, but no readily-identifiable customers. Plus, I think the recent screw-up with Google Reader may have called that lack of monetization to their attention, by actually costing them some money.

I’m guessing that Gmail, even though it’s one of their flagship products, may well be next, although I have seen a tend of ever-increasingly-intrusive advertising on Gmail. If Google should ever find a more effective way to mine information on its users (remember, users are not customers, but products) than Gmail, I would expect it to go away, too.

Just another reason to migrate away from all Google “services.” I’m tired of being a Google product.

One thought on “Good-bye, Google Reader”