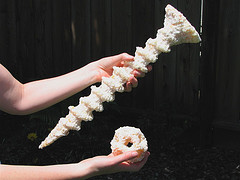 Yesterday, I got an offer for a contract that made me uncomfortable, and I turned it down. There were several reasons, but the main one was that it invoked a very bad memory. What happened was that I told the recruiter my “road” rate, and he seemed to be ok with that. So I went ahead through the interview process, which consisted of a non-technical screening and two technical interviews, by phone. The client indicated that they liked me, and the recruiter called back to tell me that he expected them to make me an offer.

But at a lower rate.

He told me that this client “never paid more than [$5 under my minimum “road” rate] to any contractor, ever”.

So, I sent an email stating that I would pass on this contract. Less than a minute later, I got a phone call from the recruiter saying that they might be willing to split the difference between the initial offer and my asking rate. I passed again. About a minute later, I got a call from the recruiter’s manager, offering to “eat” the difference and pay me the asking rate. I told them that I would have to think about it, and that I thought I could get an acceptable rate for a local contract. After a bit of pleading, I told him I would think about it, and if the offer was still open next week, I would reconsider. That was basically to get him off the phone, because I’m not going to accept any offer for that contract at this point. I found the exchange to be very uncomfortable. Among other things, I know from experience that being the highest-paid contractor at a job site was an inherently precarious position. If the client was reluctant to pay my rate, they would be immediately looking for a way to replace me, even if they initially agreed to it.

But, as I said, the main reason was a bad memory. It was about the very first contract job I ever had, with a large aerospace company in New York (which is now on my list of places I will not go). I quit a job I had held for nearly 4 years and signed a contract which called for a very good rate, and time-and-a-half for hours over 40. The recruiter indicated that there would be lots of overtime. I made the drive to New York, and started work. But there was no overtime. Being away from family and basically nothing else to do, I was definitely willing to work more hours, so I asked my supervisor about overtime. She replied that it might be a possibility in a month or so. Meanwhile, I just put in my 40 and made it a point to accomplish as much as I could. Among other things, I introduced the client to McCabe Complexity, which was a fairly new concept at the time. They liked it, and permitted me to re-do a very large detailed design (pseudo-code, parts of which had a McCabe complexity of over 200)  into smaller, less complex modules. I cranked that out over about a three-week period, and my supervisor told me that they were very pleased with my work.

About that time, I got called into her supervisor’s office, and told that the client was “re-negotiating” the terms they had with all of their contractors. Basically, if I wanted to continue working there, I would have to sign a contract that eliminated the time-and-a-half over 40. I went to my contracting agency to complain, and they told me that, yup, it sucked, but they were powerless to do anything about it. I found out that they initially also wanted to lower the rate by a few dollars, but got enough push-back that they dropped that idea.

I signed the new contract. The same day, I floated my resume out to a dozen other contract agencies (back then, that required an envelope and stamp, or a phone call, and I used both), and landed a new contract back in Texas in about a week, and turned in my notice. The client made no comment about my notice at the time I handed it in, and I continued to work without incident for the remaining two weeks. I was never asked to do any overtime.

On my last day, the Big Boss called me back into the office to ask me why I was leaving. I told him it was because I had been forced to re-negotiate my contract, and that I was disappointed that I would not be able to get time-and-a-half for overtime — and that there didn’t seem to be any overtime anyway. He replied that they expected to need extra hours starting the next month. As for the re-negotiated contract, he asked if I would stay on if they would go back to the contract arrangement that I originally signed up for. Turns out that my supervisor had gone to her manager and pointed out that I had done very good work, and was producing more than anyone else in her group, and she really wanted to keep me on the job.

The boss seemed surprised at my refusal. Nevermind that he had waited until nearly quitting time on the very last day to talk to me about it. He asked me why I wouldn’t even consider the original offer any more, and I explained that I already had a better offer closer to home, and I had planned to leave at close of business that day. He asked if there was anything else he could do to change my mind.

After a few seconds of stunned silence, he asked me why again. I explained that the main reason that I was quitting was not because they had screwed me, but because they tried to screw me, and now that I knew that they thought screwing contractors was an OK thing to do, I didn’t want to work for them any more. I returned to my desk, packed up the few personal items I still had there, cordially bid my supervisor farewell, and handed my badge to the guard on the way out.

Now, in the case of the offer I turned down yesterday, I don’t really think that anybody was trying to screw me. I just think that they thought I would be willing to work for a rate lower than I had requested. I was a bit surprised that the job-shop was willing to come back up (and eat the difference in their markup, although I have a pretty good idea of what the markup is, and there is some wiggle-room in there). But by then, it was too late. As I mentioned, I also had other reasons for turning down this contract (including the conviction that I can do better, and my apprehension about being the highest-paid contractor in the group), but once that unpleasant memory of my first contract job came back to mind, it was all over.

P.S. Since writing this, I have received two more emails and a voicemail from the job shop asking if I would reconsider for more money. Fortunately, I have also gotten a couple of calls from recruiters with possibilities much closer to home. I may not have made the right decision, but there isn’t any way to know for sure. But it feels right.