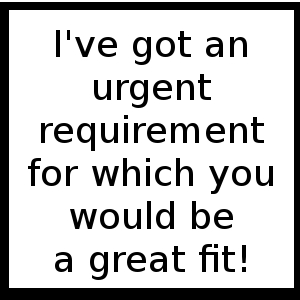 When the last contract I had ended back at the end of January, I immediately went into action. I contacted the recruiters I had previously worked with. I reactivated my Monster account. I updated my LinkedIn profile, and contacted other folks I know in my field. I did not bother with the Texas Workfarce Commission (misspelling is deliberate), since I have been thoroughly underwhelmed with their service in the past.

I got maybe 3-4 recruiter calls a week, and roughly a dozen emails a week, starting in late February. Over the course of the next two months, I landed two phone interviews, and 4 in-person interviews. There were a couple of weeks where I got zero phone calls, and 2 or 3 emails, from recruiters or employers. As I wrote in an earlier post, I got one offer that I turned down.

About the time that I was seriously considering signing up at the TWC, I finally did get an acceptable offer for a 6-month contract (I had written them off since more than two weeks had passed since the interview). Last Friday, I accepted the position, and signed the paperwork.

All of a sudden, I’m getting a flood of recruiter calls and emails. I’ve gotten more attention from recruiters this week than I got in the previous six.

It reminds me of my senior year at the University of Texas.

In October of that year, following the advice of a UT career counselor, I spent a small fortune (to me, anyway) to have 50 copies of my resume printed on really nice paper and sent out to a list the counselor provided (yes, by snail mail; email wasn’t available back then). Over the next 3 weeks, I got back 51 rejection letters. Either I miscounted somewhere, or somebody wanted to forestall the possibility that I might send a resume to his company. Or maybe one of them rejected me twice, just to be really sure. So I gave up and just concentrated on graduating with the highest GPA I could manage.

Then around the middle of the following April, I got a call out of the blue from a friend who graduated a year ahead of me, asking if I would be interested in working for his company. Sure thing. I went up there the next week, and spent a day interviewing. After all that was said and done, I didn’t really think I did very well, so I put it out of my mind, and went back to my studies.

Two weeks passed, and then I got the call from the company where I had interviewed. They had an offer — more money than I thought I would ever make at any job: $13,200/yr. Which was more than my father ever made in 20 years of civil service. I told them I would think about it and call them back.

I spent maybe an hour thinking about it. There wasn’t a lot to think about. Here was a company willing to hire me to write software, and I didn’t have any other offers to compare. Nor did I expect any, after that disappointing experience from October and November. Hands trembling with excitement, I called them back and accepted the offer.

About 10 minutes after I hung up, I started getting calls from recruiters and company representatives that had discovered that I was about to graduate with a degree in Computer Science. By the end of the week, the phone was practically melting.

I never even asked how much money any of them were willing to pay. I just finished out my year, graduated, and reported for work in June.

Similar things have happened often enough since then that I’ve come to expect it.

One thought on “When it Rains, it Pours”