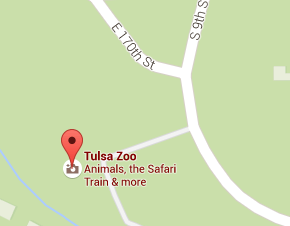 A little too exciting, actually…

This weekend, we had some of my wife’s family up to visit, so she got to visit with her daughter Kathy and grandkids. We didn’t get to do all of the things we planned, partially because Kathy was still recuperating from some injuries she received in a traffic accident several weeks ago. One of the problems she is now having is carpal tunnel syndrome. CTS can make a person truly miserable, but she managed to stay in reasonably good spirits for the visit.

One of the activities we undertook was a trip to the Tulsa Zoo. While the Tulsa Zoo is fairly nice, I would not consider it to be world-class. The Dallas Zoo has it beat by a long shot. However, we did get to see some interesting animals, and I even managed to get some nice photos. 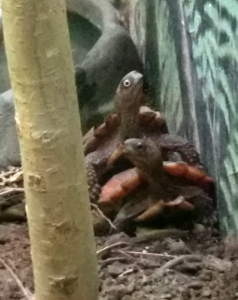 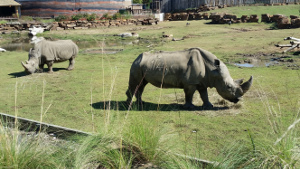 To the right is one I got of the rhinos.

I got a number of other photos, but not much truly remarkable — with the possible exception of one further down in this post. Many of the animals were napping (or hiding), and did not present very interesting poses. The grizzly bear was asleep, as was the lion. All I got to see of the snow leopard was a large paw sticking out from behind a rock.

After the sea lion feeding and performance, Kathy was obviously not feeling up to much more walking, so we took the mini-train back to the main entrance.

On the ride back, we saw some humorous preparations for Hallowe’en (like the “graveyard” with a tombstone that read: “McFly, 1996-1995” — I wish I’d had my camera ready for that one).

Then, as we headed down a long hill past a kangaroo, the train started making a lot of noise, and the ride suddenly got really rough. Then the driver stopped the train, and announced that there was a problem, and asked everyone to stay seated while they checked it out.

The car that we were in had derailed. As you might be able to see in the photo below, we stopped about 2 feet from the edge of the road bed. Any more, and it is possible that the car might have tipped over. The zoo employees got everyone’s name and phone number so that they could follow up, then let us off. I managed to get some photos. 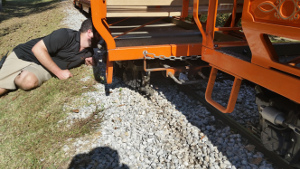 Here, a zoo employee inspects the damage to the derailed car. You can see the slope of the hill just a couple of feet from where the car stopped.

After the zoo employees got everyone’s name & phone number, they offered rides back to the front in some golf-carts. Kathy took them up on the offer, but the rest of us walked the 200 yards or so to the front, since it was obvious that they didn’t have enough carts for everyone, and I figured it best to let those folks who really needed the ride have those spots. There were some elderly women in the group, and I’m sure that they appreciated not having to walk.

The zoo reimbursed us for the train tickets, which was a nice gesture.

It’s probably a good thing that I did not realize what was happening at the time. If the car had rolled over, we would have almost certainly have experienced serious, and possibly life-threatening, injuries.

If I had known what was happening, I probably would have crapped my pants.